Posts from the ‘Vietnam’ Category

Call it Saigon. Call it Ho Chi Minh City. To me this capital is the perfect example in Asia of past meeting present, of capitalism and skyscrapers descending on a city. During the first five minutes of walking around in HCMC, I spotted an older woman wearing a traditional hat crossing the street with an old building and gleaming new one in the background: 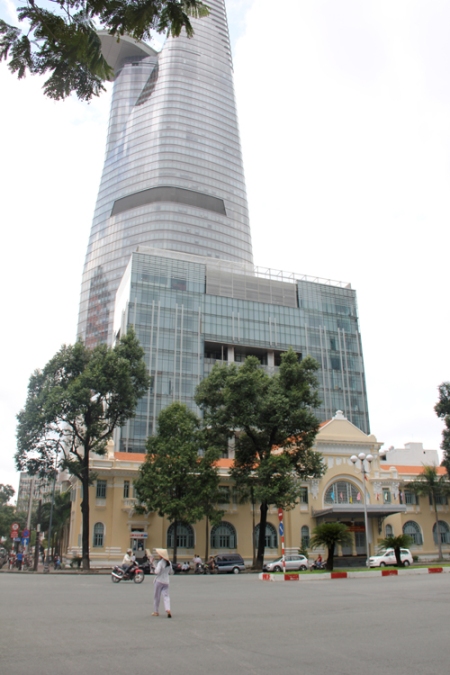 To use a bit of a cliched phrase, HCMC was a bustling metropolis. There were plenty of motorcycles and traffic. I found HCMC interesting, but I think the skyscrapers and traffic reminded me a bit of Jakarta, so I wasn’t crazy about the place or smitten the way I was with Hanoi. Would it be a good place to live? Based on the dining and night life scene I saw, I think so. But tourism-wise, I found three days to be enough. 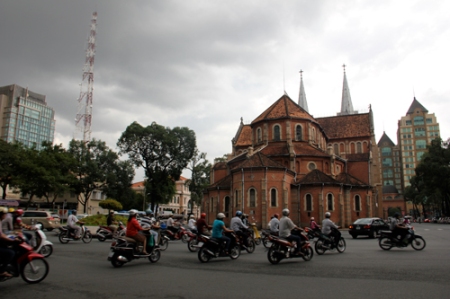 Like almost everywhere I’ve visited in Asia (Laos being the exception) malls and designer brands like Burberry have firmly staked out their spots, including in the beautiful buildings around City Hall (so much for stringent communism?): 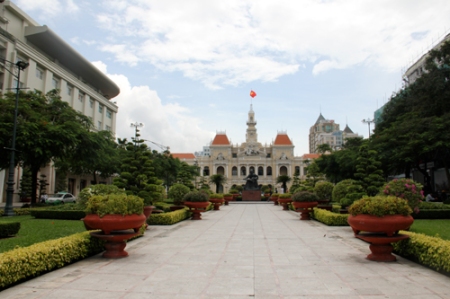 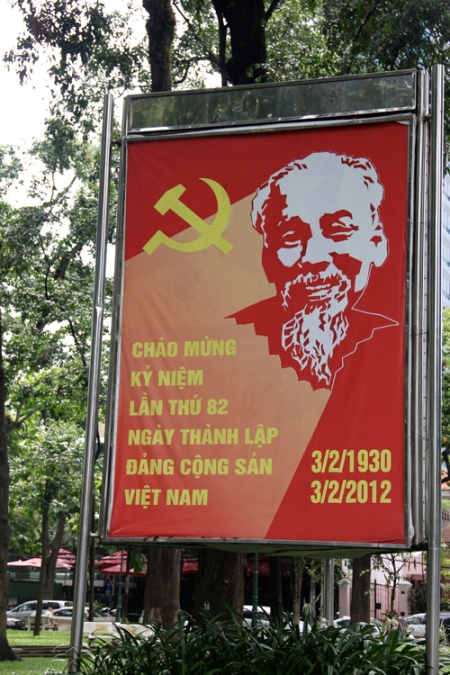 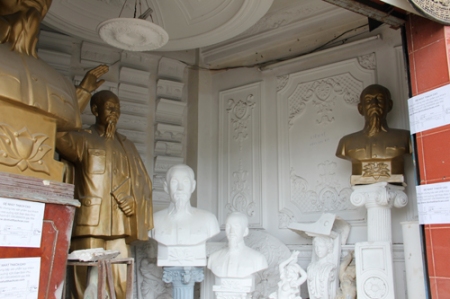 The War Remnants Museum was our first stop of the trip. Old American planes and helicopters sit in the outdoor courtyard and Vietnamese men missing arms approach tourists with piles of books for sale. The museum focuses on the Vietnam War and the atrocities that occurred during the war. Told, of course, from the Vietnamese perspective, so don’t expect something approaching a balanced account. One quote that I noticed several times came from a famous American:

“We of the Kennedy and Johnson administrations who participated in the decisions on Vietnam acted according to what we thought were the principles and traditions of this nation. We made our decisions in light of those values. Yet we were wrong, terribly wrong. We owe it to future generations to explain why.” –Robert McNamara, Secretary of Defense 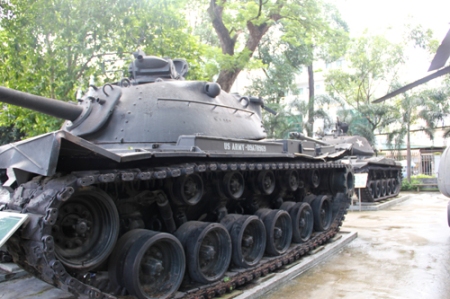 END_OF_DOCUMENT_TOKEN_TO_BE_REPLACED

Tombs and Tragedy in Hue

Hue was a city that wasn’t on my radar until I opened my Lonely Planet: “Hue is the intellectual, cultural and spiritual heart of Vietnam.” I like all of those things, so we decided to spend a day exploring Hue. 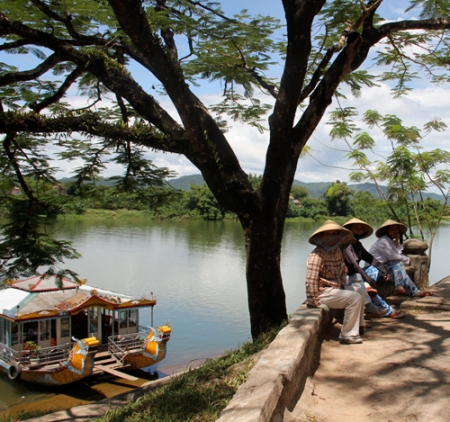 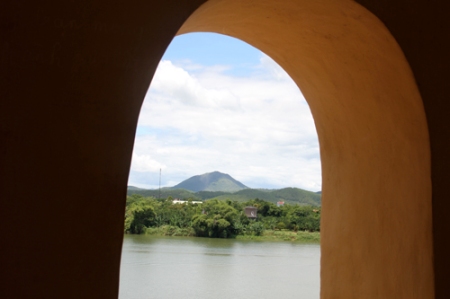 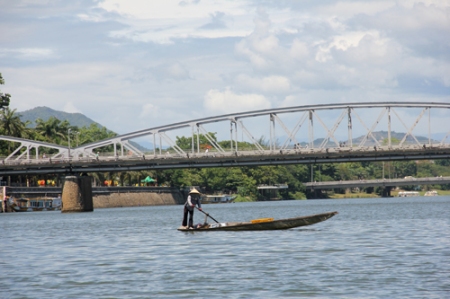 Hue is located on the Perfume River in central Vietnam (click here for a map). The air was clean, the pace was slow, so I immediately liked the city. Since we only had one day, I decided to book a tour so we could have a driver take us to the royal tombs that were further afield. Our guide Anna (her English name), met us at our hotel and then we drove to the Perfume River and boarded a dragon boat. 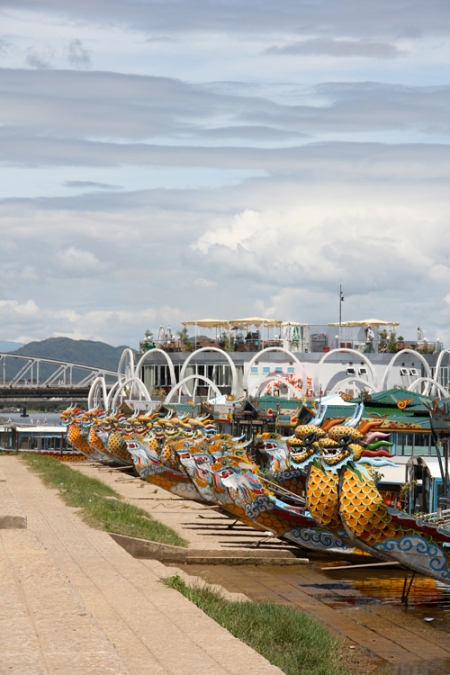 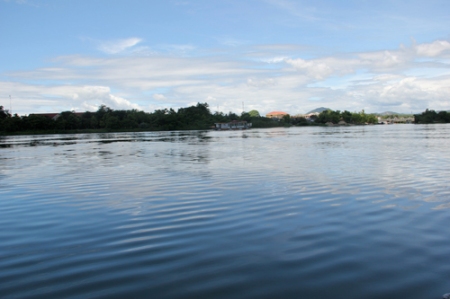 After 15 minutes in the dragon boat, where a mother and her daughter live and work, we arrived at the Thien Mu Pagoda. 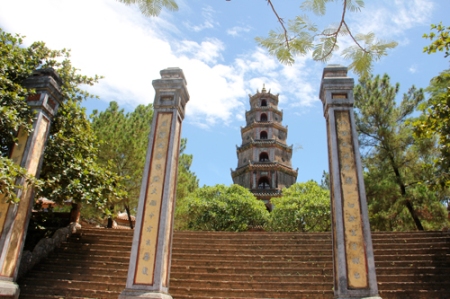 The pagoda and complex were impressive. Monks live and worship here and the car that Thich Quang Duc drove to Saigon before self-immolating is also on the grounds. His self-immolation was caught by a photographer and the photo spread around the world and later won a Pulitzer, see it here.

The past is always present, but in Hue I felt it even more. At one point my father asked Anna how her family had been affected by the Vietnam War and how they viewed Americans. 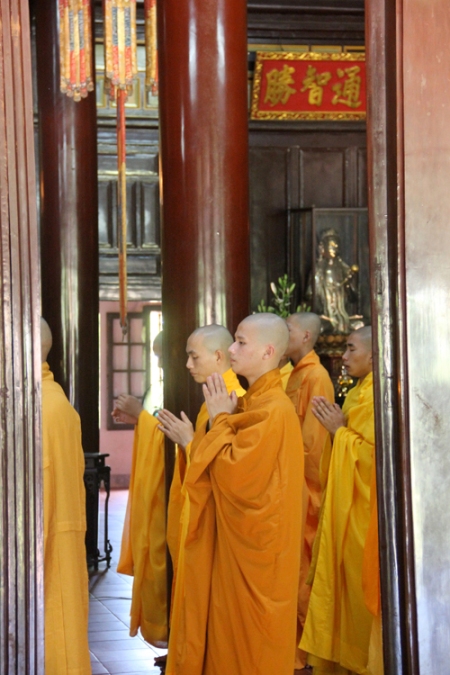 END_OF_DOCUMENT_TOKEN_TO_BE_REPLACED

Before I write about Hue and Ho Chi Minh City, I wanted to make everyone hungry. I traveled to Vietnam ready to eat and I had a list of recommendations from Princeton in Asia fellows living in country, so I was ready to go (see the end of this post for a full list of restaurants and addresses). 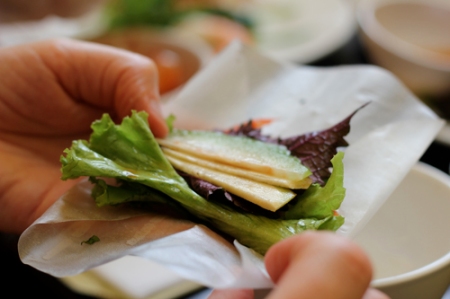 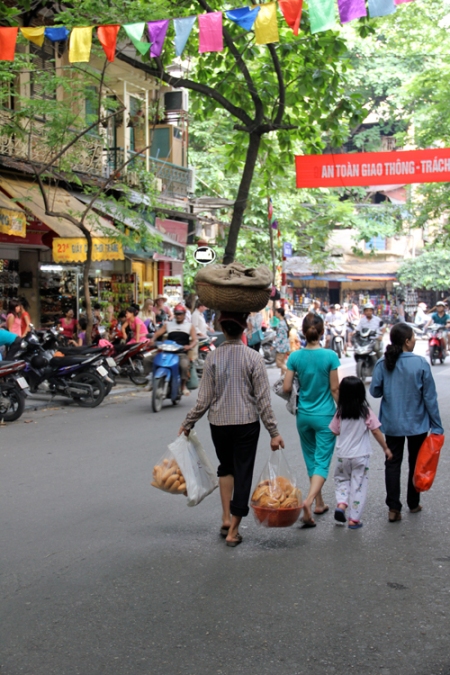 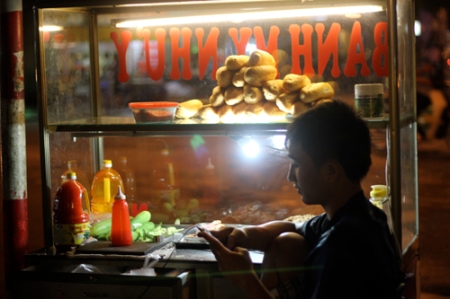 Vietnamese food is full of fresh herbs and vegetables, so it was a terrific break from the deep fried fare of Indonesia. On our first day in Hanoi we stopped by Quan An Ngon (18 P Phan Boi Chau). This was a wonderful place to sample many different street foods without the potential dangers that come with eating on the street. Up first was a delicious Vietnamese version of papaya salad topped with plenty of peanuts and a nice tangy dressing with hints of fish sauce. I’ll be trying to recreate this dish at home. 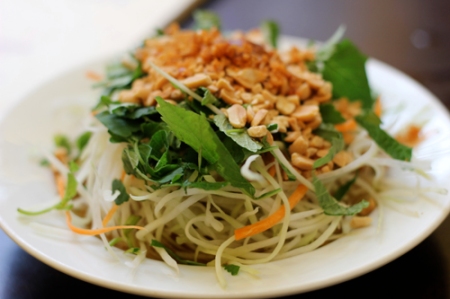 Next we tried a lotus root dish. Lotus root is meaty and when combined with shrimp and other ingredients in a sweet dressing it’s hard to distinguish it. 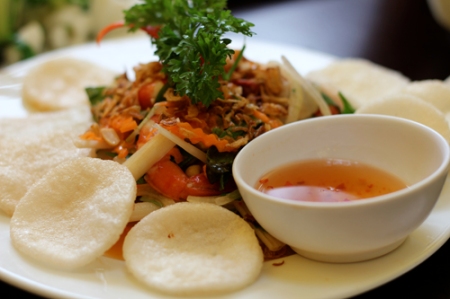 Any trip to Vietnam isn’t complete unless many portions of spring rolls are eaten. We tried streamed rolls (below) and wrapping our own rolls (photo at the top of the post). The fresh spring rolls we wrapped included pieces of star fruit and banana as well as shrimps, greens and a nice dipping sauce. Most American grocery stores now carry spring roll wrappers in their Asian food sections. 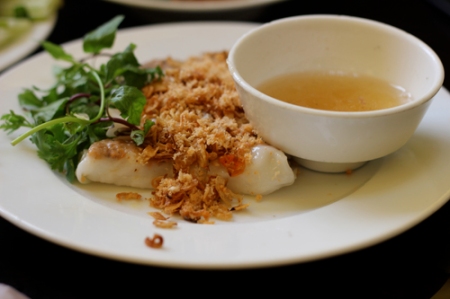 END_OF_DOCUMENT_TOKEN_TO_BE_REPLACED

One of the natural wonders of the world. One of those places you see pictures of in encyclopedias as a child. One could call it a bay, but that wouldn’t really capture it. Ha Long Bay, in Vietnamese “descending dragon bay,” is one of those places that photos don’t do justice. Thousands of limestones gut into the sky out of the water as far as the eye can see. The clouds move low and the sun dances, creating shadows and different colors of light throughout the day. 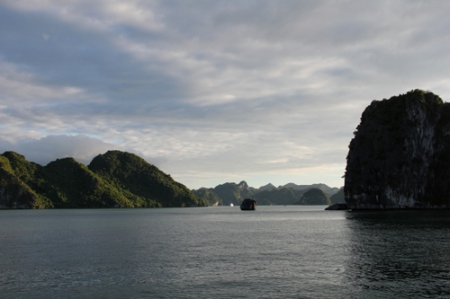 Ha Long Bay is a heavily touristed spot. Only a few hours from Hanoi, there are plenty of tour agencies and hotels that will book you a cruise. We choose the Bai Tu Long Junk. Junks are the name of the regular wooden boats that cruise the bay. There are also luxury cruise ship boats. Old photos show beautifully painted boats, but a new government regulation changed all of this last year. Now, all tourist boats must be painted white. Our guide said he thought this change was implemented after several people drowned on a sketchy tour boat. 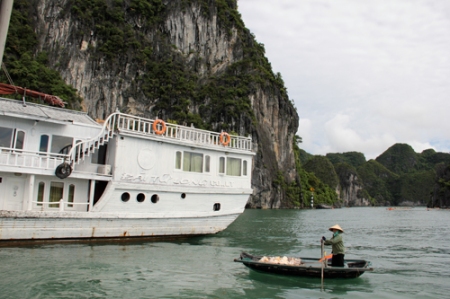 Because of the heavy inflow of tourists, there are plenty of boat vendors who paddle around and sell everything from bottled beer and wine to shells. 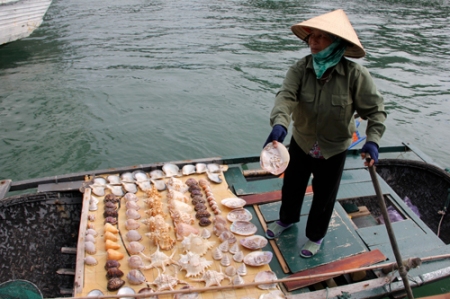 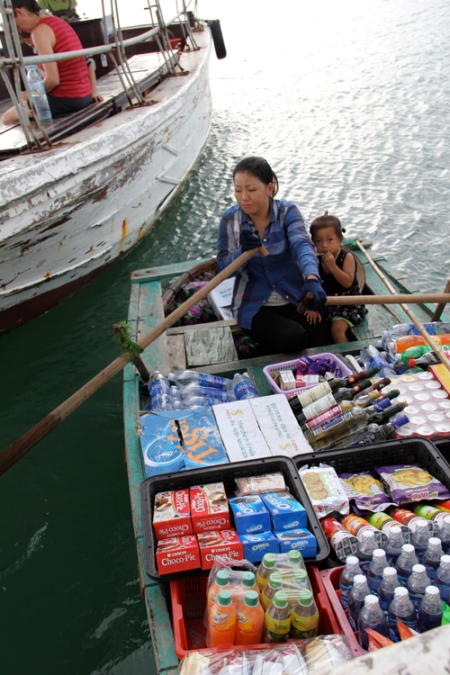 END_OF_DOCUMENT_TOKEN_TO_BE_REPLACED

The ‘Hangs’ of Hanoi

When I think back to the several days I spent in Hanoi, I remember the smell of lilies occasionally wafting through the air and the whir of motorcycle wheels speeding by. We spent hours wandering the Old Quarter of the city. Traditionally each street sold a specific ‘hang,’ merchandise, leading to names like Silk Street. Some streets are still like this today — overflowing with shoes, kitchen and hardware supplies, or even gravestones. 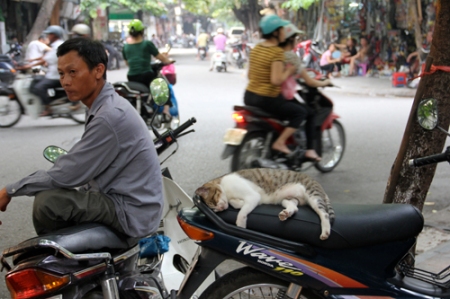 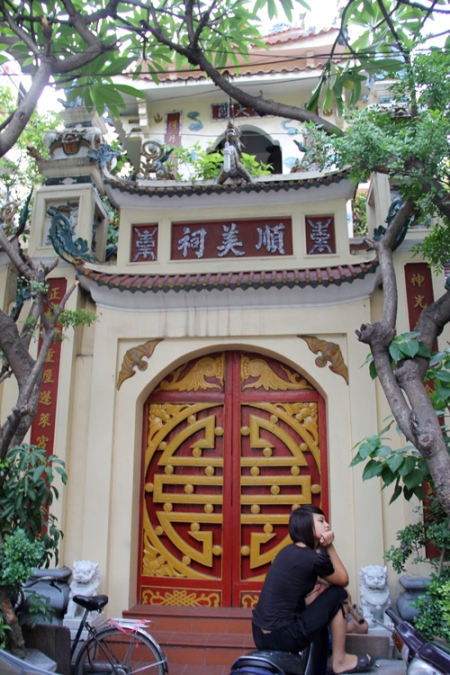 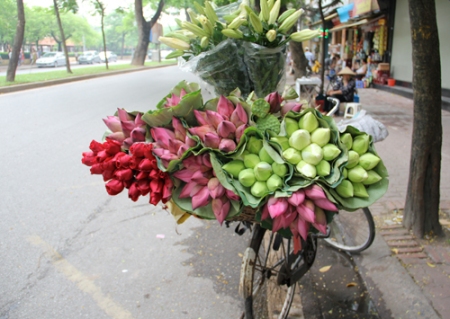 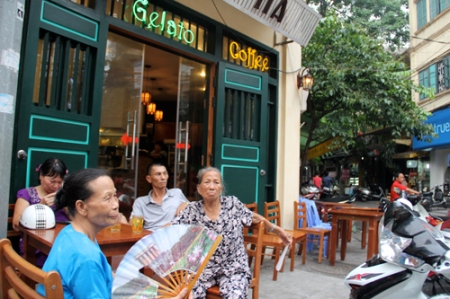 Hoan Kiem Lake creates a central point in Hanoi where people come to stroll, couples canoodle and kids beg their parents for ice cream. One thing I loved about Hanoi was how alive and young it seemed while at the same time being a city that is over a thousand years old. 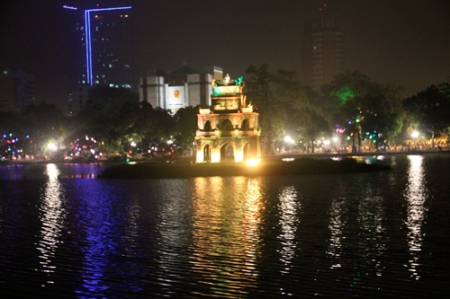 In Hanoi, people are always stopping and sitting down on plastic stools to drink tea or beer and have some food. There seems to be an endless stream of motorcycles around every corner. This makes crossing the street an adventure or a terrifying experience, depending on your perspective (my mother chose to close her eyes and be guided across). 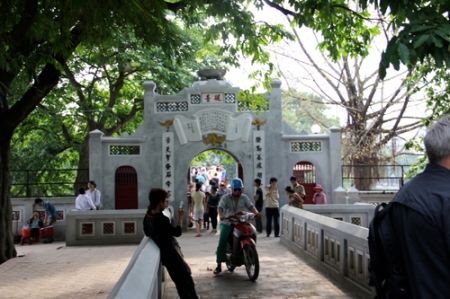 Ngoc Son Temple sits on an island in Hoan Kiem Lake. It’s a quiet and calm place to escape the motorcycles and stare at the lake, while always hoping you’ll catch a glimpse of the enormous turtle that lives in its depths (sadly, I didn’t, but the remains of his cousin are on display). 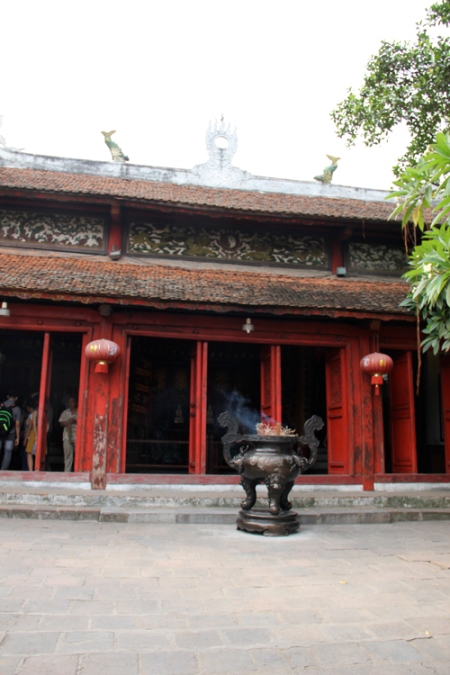