Posts from the ‘Greece’ Category

From Athens we took a ferry to the island of Mykonos. It is a beautiful place – all of the postcard photos prove to be true with the white houses with blue trimming. When we arrived, George from the hostel came and picked us up at the port. He informed us that Mykonos is a party island and that “Don’t worry if you drunk you be drunk.” It was an amusing car ride. 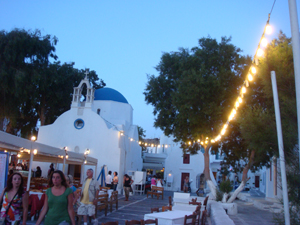 The town of Old Mykonos is full of winding small streets with restaurants and shops. Alana and I had a good time exploring this area: 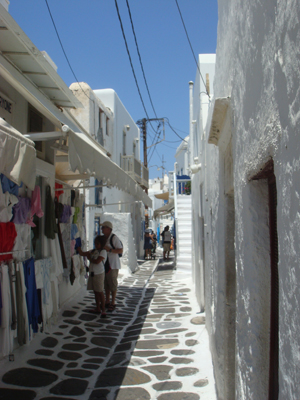 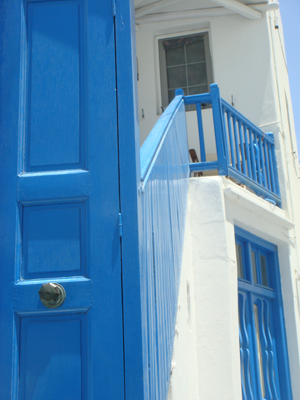 Mykonos is famous for its windmills. They overlook the harbor and this is a great spot to catch the sunsetting:

Alana and I were only supposed to spend two days on Mykonos and then take another ferry to Santorini. We went to pay George and the conversation went something like this: George: Where you go tomorrow? Lydia: Santorini. George: No. Lydia: Yes, we have tickets. George: No, earthquake. So as it turns out a 5.1 earthquake hit Santorini, so we decided that it would be best to stay put, so we decided we should check out Paradise (the beach that is):

Paradise was a nice beach (not my favorite because it was a little loud with all of the bars and the shows they were putting on) but what was neat was an outcropping far out in the water. I swam out to it and you are able to stand on it in the middle of the the sea, pretty cool: 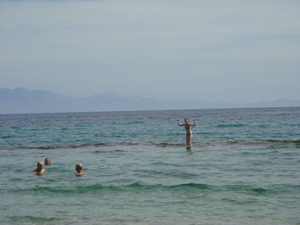 There are tons of tourists in Mykonos, the island really survives thanks to all of the business tourists bring but every now and again we would see locals: 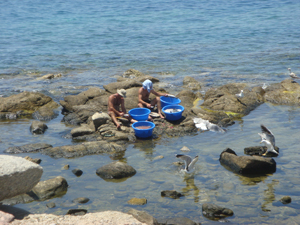 There are numerous churches all over the island, this was a nice one in the harbor. Some are decorated inside, others are more plain. The theory was that maybe these used to belong to families because there are so many of them:

And if you are in Mykonos you will encounter the man and his pelican. The pelican is the man’s pet, it’s a funny sight to see the pelican following his owner:

Now as far as food (and tacky souvenirs), I didn’t buy any of these to bring home:

Greece has mastered the art of iced coffee. All of the coffee I had there was excellent:

And of course when in Greece one should have a gyro (they stick french fries inside of the gyro in Mykonos):

And I can’t really tell you how many Greek salads I had over a period of 6 days (but it was more than 6). As far as beer, we tried Mythos and Alpha. I liked Mythos more; both were decent but I wouldn’t go out of my way to find them in the US.

Currently I am in London (finally moved into my dorm room) and I will be going to orientation shortly and tomorrow, GASP, I have class. I will post about the ridiculous days I have had in London shortly.

From Prague, Alana and I flew to Athens, a city we dubbed as the world’s largest puzzle (try putting all of those archaeological ruins together!).

We had nice, hot weather and managed to see most of the major sights in a day and a half. The evening we arrived in Athens we wandered and let me just say that it does not take long to stumble on ruins: 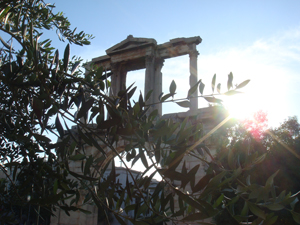 On our second full day we went to the see the Parthenon. It is impressive to see and worth the lines that wind upwards: 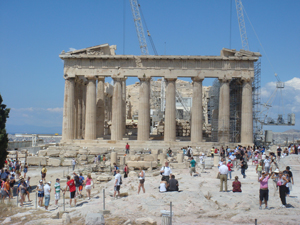 I really love Greek food so my time spent in Greece was a culinary delight. Our first evening we went to a nice taverna in the Plaka area which was where we stayed (Acropolis House, is actually a hotel, not a hostel, but was on a hostel booking website and is a good location and a nice place) and we ordered Spinach Pie, a Greek Salad and Lamb which was cooked to perfection:

We did a lot of walking around Athens (probably why I was always so hungry) and we saw a lot of nice views of the various monuments: 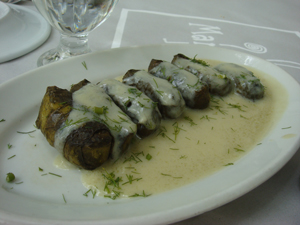 So as I child I loved olives until one day I overate and so this past semester has actually been a bit of an olive liking renewal. You really can’t avoid olives in Greece so why fight it?

Athens has the reputation of being a bit of a dirty city and it is true. One street will be beautiful and then the next will be seedy. There are beautiful old buildings and a lot of them have potential, they just need to be remodeled:

And as far as the ruins, they are no longer home to the Greeks but the cats have found a place for themselves: 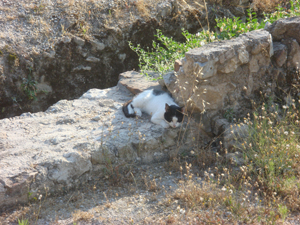 This is a photo of the Tower of Winds which was an ancient structure used to tell time in various ways:

Enjoy your evenings. I am currently in London exploring and waiting for summer session to start at the London School of Economics where I will be writing in English and not French!