A good general rule of thumb is if a place is packed with locals, families, old men shooting the breeze, and young couples on dates, you should eat there. It was around 11 a.m. and I was getting a bit hangry (anger brought on by hunger). And that was when I saw all of the aforementioned and a nice lady waved at us, “Hello, sister!” Leong Kee Tim Dim Sum at 61 Lebuh Kimberly was the answer to all my food god prayers.

I think of dim sum as Asian tapas without the tapas price tag. At Leong Kee Tim prices ranged from 0.70 ringgit cents to 7 ringgits per plate. We never did find out what was the most expensive item was at $2. Women hustled around with dim sum carts and stopped by our table and without being able to read the Chinese menu we pointed and pointed and pointed some more until our table was covered in plates of food. Leong Kee Tim wasn’t a fancy place, it was a neighborhood joint with self-serve pots of Chinese tea. But since we were two confused looking white girls, tea was brought too us and people smiled as we photographed our food.

Some buns called to me, so I pointed and then bit into the best bun I have ever had in my life. It turned out to be filled with sweet black sesame seeds and it was perfectly light and buttery. Chloe and I both looked at each other when we bit into this bun — this was the real deal.

We also tried a sweet pork bun and lots of little shrimp filled dim sum and of course any other pork thing we could find. 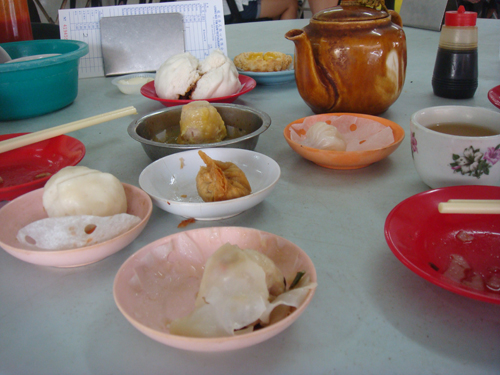 After our brunch we strolled Penang and on every street there was food. We stumbled on the tail-end of a seafood market:

The smell of curry clings to the air in Penang. We had some Indian food for dinner and it was also good. 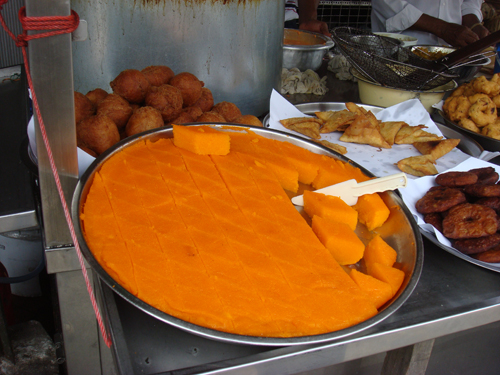 One of my favorite things about Asia is that pre-sliced fruit is so easily available. We strolled Penang with bags of papaya and an Asian version of persimmons. 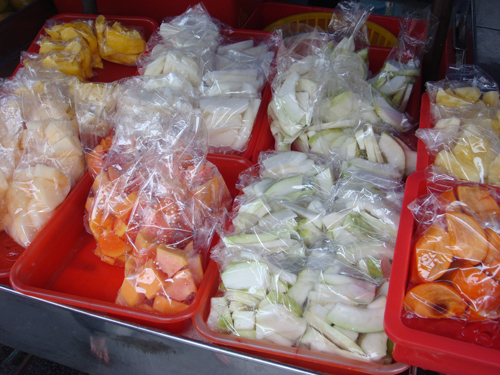 It never ceases to amaze me how many people and how many different things you can fit on a motor bike: 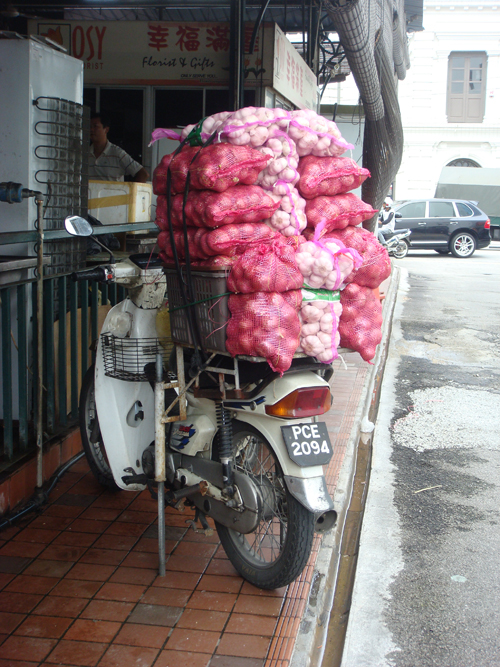 Before leaving for Penang I chatted my only Malaysian friend and future dictator, Nicholas Quah, who gave me a list of Malaysian food I had to try. Char Kuey Teow was on the list. Chloe and I stopped at a road side stand and got our plate of noodles. They were delicious and there was shrimp, scallop, coquilles and pork bits mixed in. In Indonesia kwetiau noodles are similar but there really isn’t a standard dish with ingredients like in Malaysia. We enjoyed some fresh sugar cane juice and coconut juice with our noodles.

Oh sweet god, a fried roll with sweet pork inside? The fellows we crashed with took us to dinner at one of their favorite restaurants and it was a wonderful fusion of Chinese, Malay and Indian with curries that tasted unlike any I have tried before.

This was called sambal goreng and was delicious. It’s funny because sambal goreng means something totally different in Indonesian, so although the languages are similar, we encountered plenty of differences.

A shrimp, sweet potato and kankung curry that had a nice kick, see I’m starting to like heat.

In Indonesia it’s tradition to bring something back for you friends and colleagues when you go on a trip, it’s called oleh oleh. Usually people bring back snacks of some sort, or if they like you a scarf from India, thanks Pinta. I decided to bring back biscuits. They were savory and sweet at the same time with a flaky crust and a light coconut taste. You see them all over Penang, so try some if you’re there.

Until the next meal!